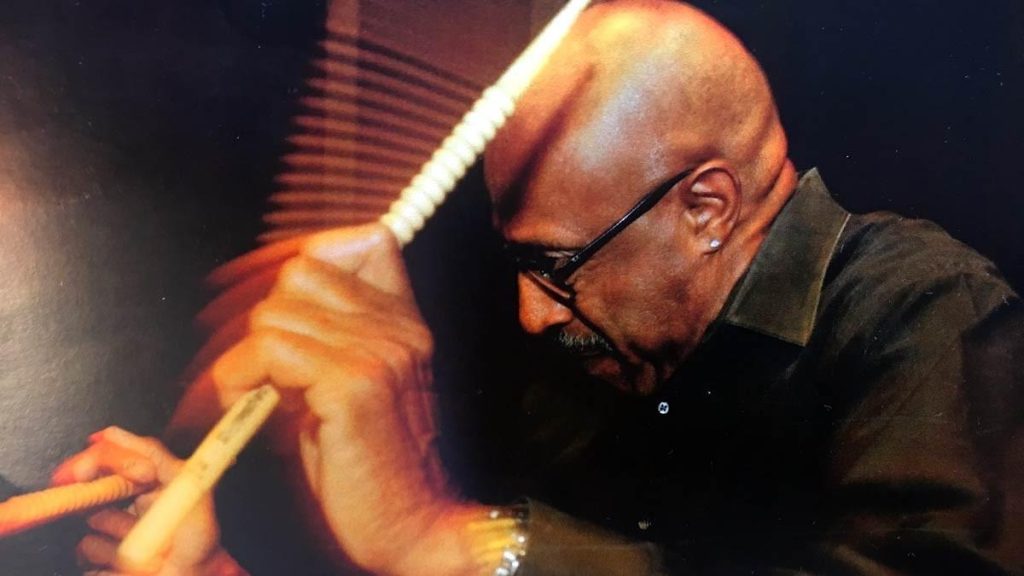 Charles “Keep-A-Knockin” Connor, original drummer for Little Richard and 2010 Louisiana Hall of Famer, created the unique. “Choo Choo Train” style of successive eighth notes with a loud backbeat used by nearly all subsequent Rock ‘n’ Roll drummers. In fact, his drumsticks are on display at the Rock ‘n’ Roll Hall of Fame Museum in Cleveland, Ohio.The son of a chief chef Merchant Marine seaman from Santo-Domingo and a Louisiana-born mother, Connor reveals, “I was born in New Orleans, in the heart of the French Quarter, the very hub of Cajun, Blues and down-island rhythms. My mother told me that whenever music was played, I kicked really hard in her womb.” He grins and exclaims, “I was born to be a drummer!” He winks and continues, “Probably ‘cuz of that exotic Creole and Dominican blood coursing through my veins,” then laughs mischievously.

As a toddler, Connor was drawn to marching parades and the “second-line funeral bands” playing Dixieland jazz through the streets of New Orleans and loved to hear his father, home on a three-month leave, sing Calypso songs around the house. Imitating the drums, Connor banged on pots and pans all-day and cried hard when his mother had to take them away to cook family meals.

Although his parents had two other sons and a daughter and could not afford expensive gifts, they saved enough money to buy Connor his first drum set when he was five. When his drumming became a loud nuisance to the neighbors, he practiced with his drumsticks four to five hours a day on a practice pad.

Inspired by such notables as Bob Alden, Art Blakey, Charles Otis, Gene Krupa, Buddy Rich and Max Roach, Connor dreamed big and diligently spent all his spare time working towards his goal of becoming a professional drummer. His hard work paid off at age 12 when he began playing drums for local parties and wedding receptions, but his professional career began at 15 when Roy “Professor Longhair” Byrd hired him as a last-minute replacement for the 1950 Mardi Gras in New Orleans.

With family blessings and his mother’s sage advice, “never use your skin color as an excuse; never doubt yourself; if you believe in yourself, everybody else will, too.” Connor went on to drum for Smiley Lewis, Guitar Slim, Jack Dupree then Shirley and Lee.

At 18, Connor joined flamboyant Little Richard’s original road band, The Upsetters, his joy marred only by the deep racial intolerance the band had to endure. Connor says, “[Black] musicians back then didn’t have Rev. Dr. Martin Luther King, Jr. to motivate them. We had to find inspiration from our faith and within our hearts.”

Connor cocks his head and says, “Little Richard was an ingenious promoter. To draw attention to his band and ensure they could perform on stage, he had to show bigots that the band wouldn’t threaten their way of life. Little Richard promoted the band and avoided racial prejudice by insisting the musicians wear thick pancake makeup and act effeminate!”

Connor pulls at his chin, and then smiles as he admits, “I really had fun. I worked with artists like Lloyd Price during vacations from Little Richard and, since Little Richard and James Brown shared the same booking agent, on “off-nights” I appeared with “The Godfather of Soul,” who coined the phrase, “Connor was the first to put the funk in the rhythm!”

Connor continues: “I was 20 when Little Richard’s band toured the United States in 1955. We played all the major theaters, including such prestigious venues as the Turner Arena and Howard Theater in Washington, D.C.; the Royal Theater in Baltimore, Maryland; the Apollo Theater in Harlem and the Paramount Theater with Alan Freed in Brooklyn.” He says in awe, “In New York, the white teenagers saw blacks having so much fun that they would dance in the aisles with them! Man, those were heady times,” and chuckles aloud.

While on a 1955 tour of Japan and the Philippines, a young girl approached Connor, and asked for an autograph, but he had no idea then that she would later influence his life. The years disappear as he grins and, in wonderment, says “[For some reason] I wrote: I hope you come to America someday. Keep Rock ‘n’ Roll in your life.”

Gaining momentum in 1956, Little Richard’s band appeared in such popular feature films as “The Girl Can’t Help It” with actress Jayne Mansfield; “Don’t Knock the Rock” and “Mr. Rock ‘n’ Roll.” Then, as Rock ‘n’ Roll exploded on the music scene, the band recorded several hit songs like “Keep-A-Knockin’,” featuring Connor’s first four-bar drum intro on a Rock ‘n’ Roll record; “Ooh! My Soul,” also featuring Connor’s distinctive “Choo Choo Train” beat; and “She’s Got It,” with a regular backbeat. Connor reminisces, “The Civil Rights Act may have been passed in 1964, but Rock ‘n’ Roll music brought young people and the world together a decade earlier.” He concludes proudly, “We got respect and power; our popularity cut across racial lines.”

Connor married in 1959, and fathered two sons and two daughters, but life on the road took its toll and the marriage subsequently ended in divorce. A later marriage to Peggy Penneman (Little Richard’s sister) culminated in divorce for the same reason.

Then, as if sensing Connor’s loneliness, providence stepped in one day when Connor, shopping at the market, met a beautiful young lady who seemed vaguely familiar. As they talked, she suddenly remembered he was “the man with the Rock ‘n’ Roll band” who gave her such an unusual but prophetic autograph in the Philippines. “My heart skipped a beat, flip-flopped and I’ve been hooked on her ever since,” he says as his eyes light up. Then, grinning like a teenager, he reveals “Although I had moved to Los Angeles in 1970 and later formed the “The West Coast Upsetters,” I wanted this marriage to last, so I limited our bookings to local gigs!” He and wife Zenaida, now married for over 30 years, have a beautiful daughter named Queenie.

To show more respect for his family, himself and enjoy a healthier, self-empowered lifestyle, Connor stopped using profanity and alcohol years ago. He now credits walking and jogging with his daughter as his way of “keeping slim, trim and still 29.”

In October 1994, Connor received a Certificate of Special Recognition from Congresswomen Maxine Waters, “In grateful appreciation for outstanding contributions and efforts on behalf of our community and government as a musical pioneer in the early years of the 5-4 Ballroom in South Central Los Angeles.” Accordingly, Connor joined the esteemed ranks of other 5-4 Ballroom honorees such as Billy Eckstine, Dinah Washington, Dizzy Gillespie and Miles Davis.

Connor appeared with Little Richard at Los Angeles’ House of Blues, Greek Theater and in 2002, along with Chuck Berry, played to a sold-out audience at the Universal Amphitheater. His influence and distinctive four-bar drum intro can still be heard on such songs as Led Zeppelin’s “Rock ‘n’ Roll” from the “Led Zeppelin IV” album.

Other recent projects include Connor’s motivational book, Don’t Give Up Your Dreams: You Can Be a Winner Too! In addition, Connor released his second EP in 2013, Still Knockin’ which debuted an original song written and sung by him, “Beginning of Rock n’ Roll,” including brand new recordings featuring the voice of Kate Flannery.  Most recently, Connor was part of a notable ensemble of music legends that included Paul McCartney, B.B. King, Elton John, Brian Wilson, and more in Sir George Martin’s PBS 8-part documentary series “Soundbreaking” in November 2016; the documentary explored the extraordinary influence of recorded music in the modern world. Connor is also featured in BBC Four’s documentary “Sharon Osbourne Presents Rock ‘n’ Roll’s Dodgiest Deals” which aired in May 2017, and was also highlighted in Pulse Films’ 10-part rock history series “Rock and Roll” in the episode titled “Love” that aired September 2017. Connor published his first autobiography, “Keep A Knockin the Story of a Legendary Drummer,” in August 2015 with Waldorf Publishing in the U.S. He is currently working on his autobiographical documentary.

Connor died on July 31, 2021, at his home in Glendale, California, under hospice care. He was 86, and suffered from normal pressure hydrocephalus prior to his death.